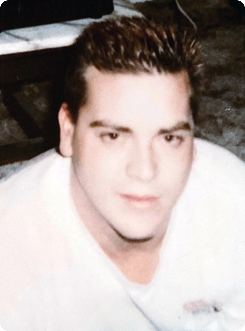 Al was the sole owner, operator, and CEO of Fix Brothers Flooring Co. since 2002.  He is the beloved father of Alan Julius "AJ" and Julian Ross Fix, the mother of Alan's children is Erin Gugliuzza.  Beloved older brother to Dean E. Fix. Beloved Uncle of Jack Fix, and Sister-in-law Mariane Enzinna-Fix.

On his mother's side was his late Aunt Marge Gelnette, and cousin Denise Dillon-Robinson, (Pete Robinson), beloved cousin to Ethan Robinson. Dear cousin of Jason Fix.  On his father's side, Alan's Stepmother Mary Jo Fix, Stepsister Sheri Durham, and Nephew Tyler McCalister. And many other cousins and long-time friends.

Calling Hours: August 27th Friday 4-8 pm at the Taylor & Reynolds Funeral Home, 70 Niagara Street.  Saturday at 10:30 am prayers at Taylor and Reynolds Funeral Home.  A Mass of Christian Burial will be celebrated at 11:00 am at All Saints Parish.  Interment in St. Patrick's cemetery.