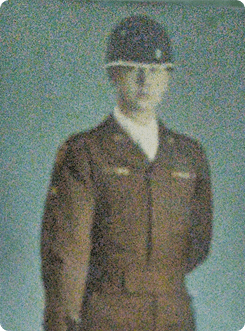 August “Rudy” Dombroski, 90, beloved husband and father, passed away on June 5, 2022, mainly, we suspect, to prevent himself from having to relive the last 13 seconds of the Bills and Chiefs NFL playoff game. A loyal Bills fan, he died peacefully knowing full well that Josh Allen is a better quarterback than Tom Brady. August was born on October 29, 1931 to August and Ina (Burke) Dombroski in ”God’s Land” Upper Michigan.

Rudy joined the Army before he finished high school and rose to the rank of corporal. He was very proud to have been a member of the United States Army Honor Guard which protected both Generals Douglas MacArthur and Matthew Ridgway during the Korean Conflict.

August is predeceased by his wife of 55 years, Violet Mae (Rickard). They raised their daughter Darlene Mae at their home in Hartland NY. August was employed as an oiler at Harrison Radiator for 46 years. “Mister Clean” as his coworkers referred to him was well known for his dirty jokes and limericks.

Rudy had a passion for mowing the lawn as demonstrated by his four riding lawnmowers. Each mower had to be used in a specific area of his ginormous lawn. August was the first Honorary Trustee of the Somerset Union Museum, an educational institute that he founded with his daughter and contributed to generously. The museum will house Violet’s and Rudy’s extensive antique collection.

Rudy is survived by his daughter Darlene (and her husband Andrew Poss) and two cats Smokey and Sophia. A private military graveside service will be held at the Bear Ridge Cemetery. In lieu of flowers, a tribute to Rudy’s legacy by donation to the Somerset Union Museum would be greatly appreciated.