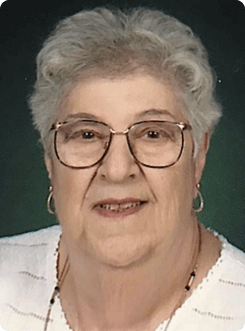 Barbara Ann (DeFlippo) Poyfair entered into rest on October 21, 2017. Born on November 9, 1932, she was the daughter of the late Dominck and Barbara (Camarre) DeFlippo. A lifelong resident of Lockport where she grew up in the West End assisting with the Family Restaurant. Barbara was a Secretary for Lathan, Lumsden & McCormick Accounting Firm, formerly O'Conner - Cornelle Accounting, for over 40 years.

She was a graduate of St. Joseph's Academy and the St. Joseph's Business School. She was a member of the Secretaries association, was active with the Eagles Club and Agitators Group, was an avid Bowler along with her Husband Chuck and after retirement enjoyed many winters in Largo, FL. Charles her husband of 44 years predeceased her on July 27, 2003.

Friends may call from 2-4 PM and 7-9 PM on Wednesday at the Taylor and Reynolds Funeral Home, 70 Niagara Street, where prayers will be held at 9:30 AM on Thursday. A Mass of Christian Burial will follow at 10:00 AM at St. John the Baptist Church. Interment in Glenwood cemetery. Memorials Niagara Hospice would be appreciated by the family. Condolences may be offered below.