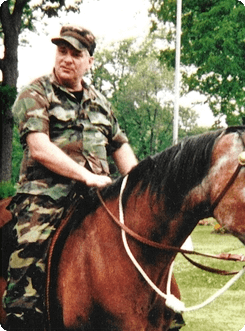 Chris enlisted in the US Army in 1968, where he spent two years in Germany, where he was a paratrooper and earned a medal for marksmanship. When he returned home his love for horses brought him to Rainbow Stables, where he met his wife, Susie, and bought his first horse, T-Bird. He then became an Erie County Sheriff in the Mounted Division.

Chris held many jobs in his lifetime including driving for Pepsi Cola, Relco Systems, Schultz Transportation, Beauman's Towing, and Union Taxi. Also, he enjoyed collecting trains and volunteering at the Medina Railroad.

Beloved husband of Susan Confer Rowell; beloved father of Ann Rowell and the late Sarah Rowell; cherished grandfather of Aaron Goodenough.
There will be no prior visitation. A Memorial Service will be held at a later date at the Western NY Veterans cemetery.