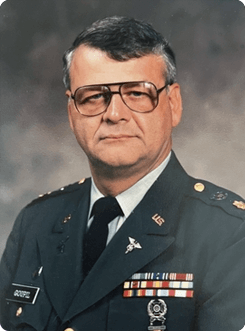 Obituary of Col. Daniel A. Goupil

Retired Col. Daniel A. Goupil (USAR), son of Roger and Mary Louise Goupil, brother of Roger, Patrick, Sara Pazik, and the late Michele, passed away February 28th, 2022 at home under the care of Hospice, his son, and his dear niece, Kathryn.

Daniel served in the US Army Reserve 356th, 338th General Hospital, 365th Combat Support Hospital, and 8th Medical Brigade. He was a retired pharmacist, working at multiple hospitals within Western New York, including EB Meyer, Lafayette General, Columbus General, and Kaleida at Millard Fillmore Gates. He also worked as a pharmacy consultant and until late volunteered his time doing chart evaluations at a local nursing facility. Daniel had served in many administrative roles at local hospitals and nursing facilities, including as Deputy Commissioner at the Erie County Home and Infirmary. In retirement, Daniel was a member of the Erie County SMART.

Daniel is survived by his son, Daniel R.; and daughter, Christine; including his grandsons, and multiple nieces and nephews.

Friends may call Friday, March 4, 2022 from 4-6 PM at the Taylor & Reynolds Funeral Home, 70 Niagara Street, Lockport, where Funeral Services will be held on Monday, March 7, 2022 at 9:30 AM. Military Honors will follow at 11:00 AM at the Western New York National Cemetery.

In lieu of flowers, memorials may be made to Hospice Buffalo or St. Jude Children's Hospital.