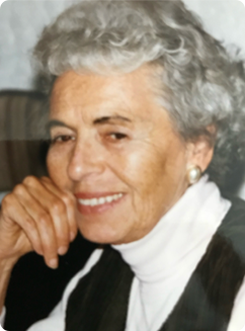 Helen D. McGreevy passed away peacefully on Thursday, December 29, in her home at 79 Ontario Street in Lockport. She was 99.

Helen was born in Lockport on April 18, 1923, the daughter of Elizabeth (Madden) and Bernard Dugan of Hawley Street. She attended St. Patrick's Grade School, Lockport Senior High School, and St. Joseph's Academy. She married John William (Bill) McGreevy on August 4, 1945. They were married 46 years prior to his passing in 1991.

She worked as a secretary at Harrison Radiator, and as an administrative assistant for a tax and accounting business, among other pursuits.

Helen gave birth to nine children. She was preceded in death by her husband and parents, her sisters (Margaret, Jane, and Catherine) and her brother Bernard, as well as four of her own children (Mary Anne, Kathleen, Therese, and Martin). She is survived by five of her children: Patrick (of Massachusetts), Francis (of Clarence Center), Thomas (of Florida), Joseph (of Clarence Center), and Michelle Waple (of Lockport) and their respective spouses Elizabeth, Anne, Cathleen, and Mark. Also surviving Helen are 20 grandchildren and 28 great-grandchildren. Helen nurtured a household of ten, and spread her care to a vast extended family and beyond. She took her citizenship very seriously and was not shy about expressing her perspective. She kept reading and learning her entire life and developed a particular interest and expertise in naturalistic approaches to health. She was deeply committed to prayer, keeping in mind her extensive family and friends. Her Christian faith was very important to her.

Visiting Hours will be held at Taylor and Reynolds Funeral Home, 70 Niagara Street, Lockport from 4 to 8 pm on Wednesday, January 4, 2023. There will be a Funeral Mass at 1 pm on Thursday, January 5, at All Saints Catholic Church, (Formerly St. Patrick's where Helen was a parishioner her entire life). A reception will follow at 80 Main from 230-5:30 pm.