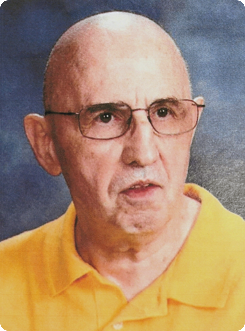 Jack J. Vermeson, Jr., age 83, passed away on Saturday, October 2, 2021, after a lengthy illness. Born November 20, 1936, in Niagara Falls, NY, he was the son of John Vermeson, Sr., and Rosalie (Follick) Vermeson. Due to the early death of his mother, Jack was raised by his stepmother, Julia (Camarra) Vermeson, and his father.

Jack graduated from DeSales Catholic High School in 1955. He attended college at the University of Buffalo and in 1976 graduated with a degree in Bachelor of Arts.

He served in the United States Air Force Reserve from 1955-1959, receiving an honorable discharge in 1963.  Jack was employed by Harrison Radiator Division until the plant closed. He then transferred to EDS Computer Co. as a computer programmer until his retirement.  In addition to his interest in computers, Jack had a strong interest in classical music, photography, and chess.

No prior visitation services will be held. A mass of Christian Burial will be held at All Saints Roman Catholic Parish, 76 Church St., Lockport, NY, on Friday, October 8th at 10 AM. Burial services will be held directly following the mass at Riverdale Cemetery, 5605 Old Lewiston Road, Lewiston, NY.
Arrangements by Taylor & Reynolds Funeral Home, 70 Niagara Street.