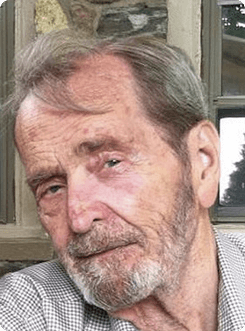 Jerry spent a lifetime caring for others. Immediately after graduating from LaSalle High School in Niagara Falls, Jerry joined the Air Force, went on to become an educator at Niagara University, and then to teach history and economics in Lockport High School, where he met his wife and fellow teacher, Agnes.
Together they raised two children, Mark and Danielle "D.J.," who followed in their parents' footsteps by helping others in their own professions. Mark is also a teacher in Sodus, NY, and Danielle is an animal advocate in Washington, DC.

Jerry, with the help of family and friends, cared for Agnes through her decades of living with MS. No wish of Agnes' was too big or too small: fish fries, bird houses, getting the coffee temperature just right, ... he did it. Agnes was his focus, and his children are forever grateful. After Agnes' death in 2008, Jerry became a volunteer grandparent in several Lockport elementary schools: Washington Hunt, John Pound, and Roy B. Kelley. He was also a dishwasher at Lockport's Salvation Army soup kitchen and trimmed trees in Children's Memorial Park.

In January 2017, Jerry moved to Marion, NY, to live across the street from his son and daughter-in-law. Mark and Jerry were able to have 14 months of watching sports together, including the Bills making the playoffs in 2018! Danielle was able to spend extended time in Marion, too, which made Jerry's eyes sparkle more than anything.

Calling hours will be at Taylor and Reynolds Funeral Home, 70 Niagara St., Lockport, NY 14094 on Tuesday, March 27th from 5-7 PM and Wednesday, March 28th from 9-10 AM. Services will immediately follow the Wednesday calling hours.