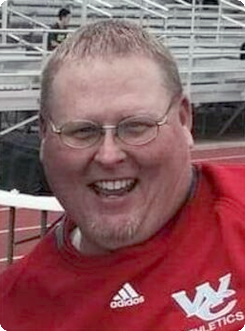 Scott Richard Poole of Glasgow, KY, entered into rest on April 3, 2021 in Kentucky. Scott was born on June 23, 1969, in Newfane, NY, and is the son of the late Richard J. Poole and Sandra Poole (Zastrow) Brother of Tina Poole; brother-in-law of William Keck; survived by grandmother, Annabelle Zastrow; and uncle, David Poole; aunts, Lisa Poole and Beverly Breidert; and numerous cousins.

Scott Poole graduated from Newfane High School in 1987. Following high school Scott attended William Penn University where he lettered in football and wrestling from 1987-1989. Scott was also a member of Sigma Phi Sigma Fraternity and a member of the University Choir in 1988 and 1989. Scott then earned his MA from the University of Alabama.

Scott worked as an educator for 25 years. Scott taught and coached at Lamar County HS, Brooker T. Washington in NC before accepting a head coaching job in Benton, Mississippi. Scott then spent six years at Welds Central High school in Colorado coaching football and as the school's Head Basketball Coach. In 2020 Scott accepted the Assistant Athletic Director and coaching position at Caverns High School in Glasgow, KY, to be closer to his family.

Scott Poole loved life and was always cheerful and friendly to everyone, some referred to him as the jolliest person in America, his smile and laugh will be dearly missed by all the students and people he touched. Scott also loved the Buffalo Bills and the University of Alabama.