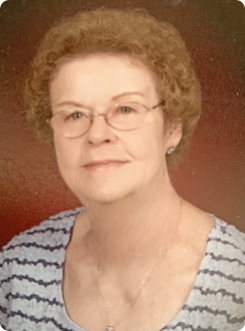 Ruth (Crego) Ruberto, age 85, passed away August 9, 2019 at Lockport Rehab & HCF. She was born November 16, 1933 to William and Genevieve Kirkman Crego and was a lifelong resident of Lockport NY. She married Donald Ruberto at St. Mary's R.C. Church on September 7, 1957; Don passed away February 18, 2007.
She was a member of the Class of 1951 at Lockport High School and was co-chairperson of the class reunions committee and luncheons notifications. Ruth was a secretary in the Sales and Purchasing Departments at Harrison Radiator Div. from 1951 to 1968. She was a stay at home mom when their first child was born Laura in 1969, and son Jim was born in 1971, until 1986. At that time she became a substitute clerical worker for the Lockport City School District until 1996.
She and Don enjoyed traveling to many American Legion and Marine Corps League conventions over the years. Also cherished were the week-long vacations they took with their daughter and son for several years after Don retired. She was an avid reader, loved doing all kinds of needlework, emailing friends, going to Seneca Niagara Casino and flying to Atlantic City with her sister Carol.
She was a faithful parishioner and volunteer at St. John's R.C. church in Lockport. She was a member of B. Leo Dolan Post 410 American Legion Auxiliary since 1960,  the Lockport Marine Corps League Auxiliary, the BPOE Elks #41. She bowled over 50 years in the Variety Girls Bowling League. Ruth always considered herself blessed for having so many wonderful friends and family, especially those who came forward with so much support after the death of her husband.
Loving wife of the late Donald Ruberto, she is survived by her beloved children, Laura(Richard Thompson) Ruberto, New Hartford(Utica), NY and James Ruberto Lakewood, CO. She was blessed with her first grandchild four months after Don passed away, Ella Rose, and Aaron James four years later. Sister of Carol (late Duane "Bud") Jones of Rochester NY; many nieces, nephews and cousins. Sister-in-law of Sr. Rene Ruberto, SSMN, Francis(Marcy) Ruberto, Castle Rock, CO, James (Maura) Ruberto, Lockport NY. Predeceased by siblings Virginia, William (Mary), Roy ( Joan) and Frank Crego; Mary Jane (late Herbert) Walker.
Friends may call Tuesday from 3-7 at the Taylor & Reynolds Funeral Home, 70 Niagara street, where prayers will be held on Wednesday at 10:30 am. A Mass of Christian will be celebrated at 11:00 am at St. John's RC Church, 168 Chestnut St. Interment in Cold Springs Cemetery.  Ruth loved all animals, especially her beloved kitties Dolly, Molly, and Maggie. Memorials to Save-A-Pet, PO Box 114, Newfane, NY 14108 or to a charity of one's choice would be appreciated by the family.
Share
0
Share
0
Share
0
Share
0