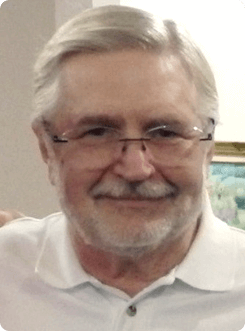 Steve was born in Scranton, PA, attended city schools, graduated in 1966 with a degree in music education from Mansfield (PA) State College and subsequently earned several graduate degrees in music performance and education.

Steve relocated to the Lockport/Medina area in 1966 where he established and taught the String Orchestra program in the Royalton-Hartland Central School District for 35 years, retiring in 2001. During his teaching career, Steve served many years on the Niagara County Music Educators Association Executive Board as Vice President of Orchestras, as well as a two-year term as President of the Association. He was an active member of the New York State School Music Association for his entire career and well into his retirement. He also provided private music lessons to numerous students.

If it had strings on it, Steve could play it and teach it. He loved nothing better than teaching music and getting together to jam with other musician. Steve was the consummate teacher and musician who touched and enlightened the lives of many.
He is survived by his brother, Richard (Linda) of Crest Hill, IL; a son, Mark (Katherine) of Maryville, TN; three grandchildren; two great-grandchildren; several nephews, grandnephews and many cousins.
There will be no visitation or funeral service. A memorial Celebration of Steve's Life and Music will be scheduled and announced at a future date, likely to be held in the Lockport, NY area. Anyone wishing to make a memorial donation in Steve's name may do so through the Greater Buffalo Youth Orchestra at www.gbyo.net, attn: Janice Jones. Arrangements by Taylor & Reynolds Funeral Home, 70 Niagara Street.

We will be announcing the date and time for the celebration of life for Stephen Pregmon on this page as soon as that information is available.